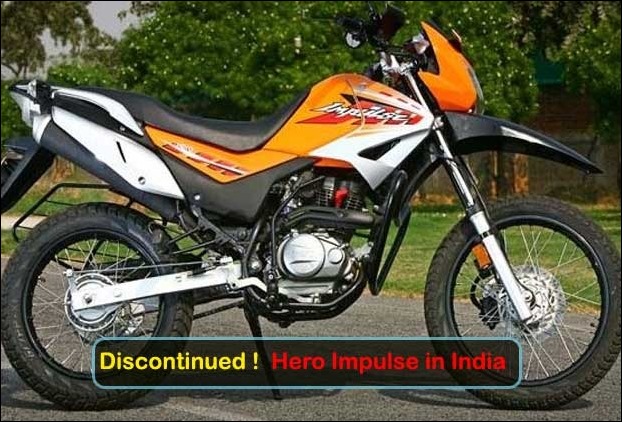 The Hero Impulse is the first bike that was launched at the end of Hero Honda’s tie-up. The company had first introduced this bike in London on August 9, 2010, after which it was launched in India in October 2011. Because of low demand, the company had stopped its production several times, and now Hero has finally removed the name of this bike from its official website.

The discontinued Hero Impulse is powered by a 149.2 cc single cylinder, air-cooled mill coupled engine, mated with 5-speed gearbox. This engine generates 13.2 PS of power at 7,500 rpm and 13.4 Nm of peak torque at 5,000 rpm. The Hero Impulse traces its origins to the Honda NXR Bros, that is running on the roads of Brazil.

In front of the Hero Impulse, long travel suspension with disc brakes and drum brakes at the rear have been fitted. The Hero Impulse has a ground clearance of 245 mm.

It is noteworthy that a few dealers and customers had expected that the 223 cc Karizma engine would come in the Impulse, but Hero refused to introduce the bigger capacity dual – sport bike. However, Hero can launch its first 125 cc automatic scooter, the Hero Dare by September 2017.