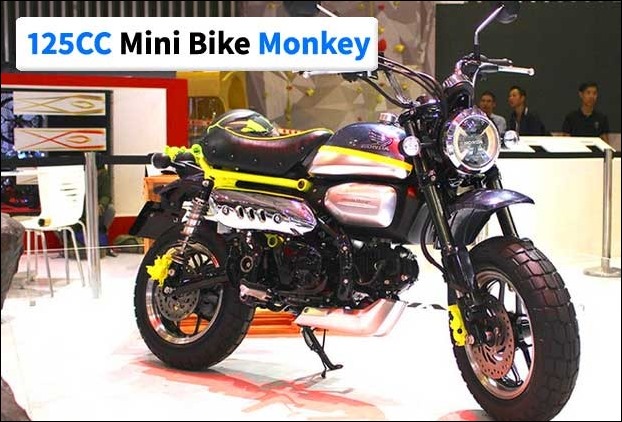 Some time back, the pictures of Honda Monkey were leaked in the market, but Honda now has showcased its 125 cc mini bike at the 2017 Vietnam Motor Show. In fact, this is the modern version of the previous Monkey bike, which is already a popular bike with its funny look.

The Honda Grom , already one of the most famous mini bikes in the overseas market, has been also built on the Monkey’s platform. In India, it can also be launched on the lines of Honda Navi.

The company has not yet given any official information on the engine, nevertheless, it is expected that the bike has been provided a 125 cc, air- cooled engine like the Honda MSX125, which generates a maximum power of 9.38 bhp and 10.6 Nm of peak torque. At the same time, this engine is linked to a 6- speed gearbox.

The bike has been provided the similar front suspension like the MSX bike. Apart from this, brakes and wheels are also almost the same. Although, the headlight is new which comes with daytime running LEDs this time. This mini bike can also be launched in India, seeing the success of Honda Navi.

It is worth- mentioning that this mini bike of Honda has been much popular since its launch. According to HMSI (Honda Motorcycle and Scooter India), Honda Navi has a tremendous record of sales. A total of of 60,000 units sold  from launch to March. In fact, the goal was to sell only 50,000 units, but this mini bike has made this magical figure.

For your information, Honda Navi is manufactured at Tapukara plant in Rajasthan. As for mileage, it returns an ARAI certified mileage of 60 kmpl. Currently, this mini bike is in trend in India and Nepal.

Now, the company is also considering to send it to SAARC countries like – Sri Lanka, Afghanistan, Bangladesh, Bhutan etc. There are four plants of Honda Motorcycle and Scooter India Pvt. Ltd. (HMSI ) in India – Manesar, Tapukara, Narsapura and Vithalapur. And, the total capacity of these plants is 58 lakh units.