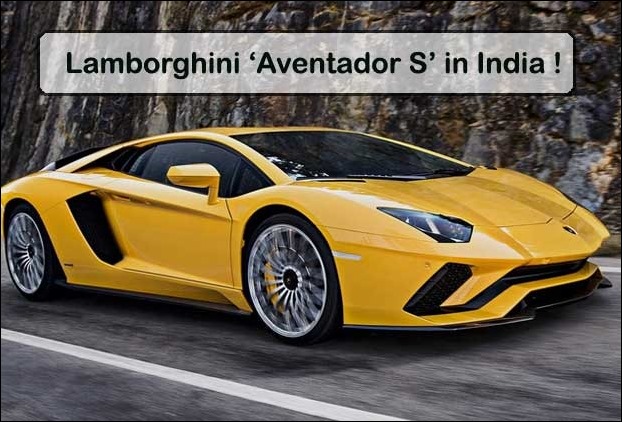 Lamborghini, famous for its luxury cars in the world, has launched its new car on Indian roads. The company has introduced this car in market in the name of the Aventador S. The ex- showroom price of the car in Delhi is Rs 5.01 crore. Last time we had reported about the launch of 3.5 Crores priced Lamborghini Huracan RWD Spydar in India .

Earlier in the Indian market, the standard version of Aventador had been introduced by the company. The new car will replace it. The company has already launched the Huracan RWD Spyder car last year.

The Lamborghini Aventador S is powered by a 6.5- litre V12, twelve cylinder engine, though the standard version of Aventador had, too, this engine. But, in the new car it has been introduced with new power tuning. It has 740 PS of power and 690 Nm of torque. In comparison to the current model, it will get 40 PS of more power. And, the engine is linked to a 7-speed automatic gearbox.

In terms of comfort, the Lamborghini Aventador S comes with an electric – controlled all- wheel- drive system for better riding. Moreover, it reaches the 0 – 100 kmph mark in just 2.9 seconds with a top speed of 350 kmph.

The new Lamborghini Aventador S has been made more aerodynamic than before, which has increased its performance, and mileage has also been better than before. There has also been a change in its front bumper, rear bumper, diffuser and air intake section. The cabin has new TFT display, while remaining is the same as before.

Here it is worth- mentioning, this is the first Lamborghini, in which four – wheel steering is given. Apart from this, the rear wheels of the car are also connected to this steering and move according to need. Because of this, it will turn into lesser space in lesser speed.

In addition to three driving modes – Strada, Corsa and Sport, the Lamborghini Aventador S comes with the new ‘Ego’ mode. In the ‘Ego’ mode, driver can set steering, suspension and engine settings according to his need.