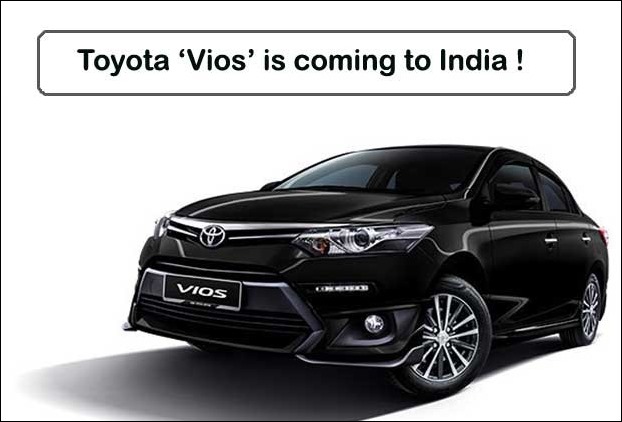 Japanese auto maker Toyota will soon launch its sedan car – the Vios in the Indian car market. The company will show the first glimpse of this car in India at the 2018 auto expo, and it is expected to be launched two months later.

This information has been received from auto news website Cars and Bikes. On the one hand, this car will be a new model in the Indian market, while on the other hand it ranks high among the sedan cars across the world.

Know some features of this compact sedan:

The 1.5- liter petrol variant of this car is sold in Thailand and according to the news, in India, the car will be brought with the same variant. The car has a 7- speed Super CVT transmission, though in India, it will be launched with a 5- speed manual transmission gearbox.

Besides, both variants will be available in India. This car is not available in diesel variants, notwithstanding it is expected to launch with the 1.4- liter diesel engine in India.

The Vios is one of the most specialized cars of Toyota. Its design and looks are quite cool. The front grill has been given V shape design. At the same time, the car has been blessed with vertical daytime running lights (DRLs) and eyebrow LED parking lights.

Moreover, the head lights and taillight give it a masculine look. Dimensionally, the Vios measures 4420 mm in length along with a wheelbase of 2550 mm. The interior cabin of the car is also extremely beautiful. It comes with leather upholstery, touchscreen infotainment and connectivity systems.

Experts believe that the Vios will come equipped with plenty of features like ABS (anti-lock braking system) with EBD (electronic brake-force distribution), dual airbags, ISOFIX for child seats and traction control system. Besides, the top variant of the car can also be provided ESP feature.

The price of this car is expected to be between Rs 7.5 lakh and Rs 12 lakh in the Indian market. The car will compete directly with the Maruti Suzuki Ciaz, the facelifted Skoda Rapid, the Hyundai Verna, the Honda City and the Volkswagen Vento.