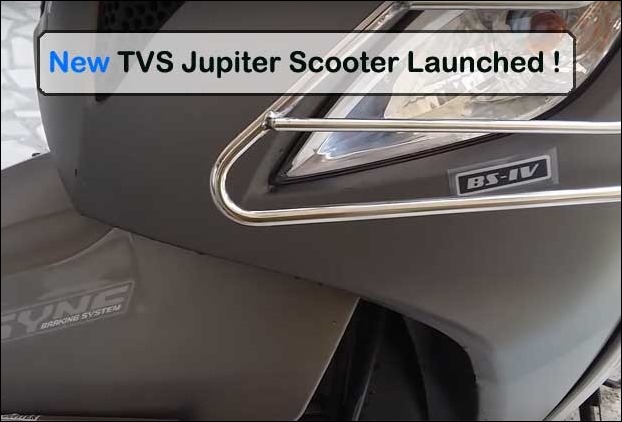 TVS Jupiter’s new BS IV model of 2017 was recently launched in India.The main feature of this  variant is that it has a BS IV compliant engine which is more environment friendly .The price has remain unchanged with price of base price being the same RS 49,666.The top most variant of TVS Jupiter  ‘ZX’ (Rs 53,666) has now been equipped with disk brakes.

The new BS IV model of Jupiter has low friction 109.7 cc engine which produces 8BHP power.The all aluminum engine’s motor is paired with automatic transmission.The model has also been given

Talking about the new features the scooter now gets econometer for fuel consumption regulation.Of the two modes ‘Eco Mode’ and ‘Power Mode’ that the scooter has been enabled with the former one lets the rider achieve a better mileage.With the addition of two new colours (Z Green and Mystic Gold)  in the BS IV Jupiter version now the total available colours are ten.This model of scooter also uses SBS aka  Sync Braking System which reduces skidding and slipping of the scooter when brakes are applied all of a sudden.

Jupiter is perceived as one of the best scooter model in India and company has already sold 1.5 million of its units.TVS Jupiter competes with Honda Activa 4G , Mahindra Gusto and Hero Maestro.

This is TVS’s 2nd BS IV compliant scooter after its another scooter Wego (110cc / RS 50,434) was launched with BS IV engine.Bookings have already started for TVS Jupiter’s new BS IV engine model of 2017 .