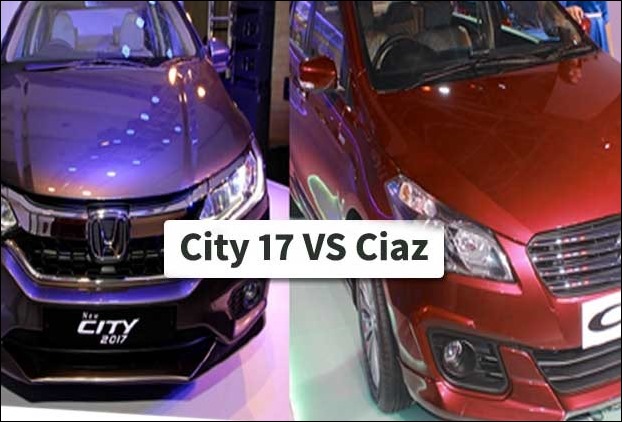 Back in the 1998 when Indian market was introduced with Honda City in the premium mid-size car segment it had no competition.This proved to be a beneficial move for the company and it went on to capture the segment and became a default option for the people.Since then , more than 6.5 lakhs units of Honda City car , has already been sold in India.

But the scenario began to change in the year 2014 when in the same segment Maruti Suzuki launched its premium sedan Ciaz.The move was successful and this Maruti’s car surpassed the Honda City in-terms of sales.Currently , there is a tough competition between Honda City and Maruti Suzuki Ciaz as far as monthly sales are concerned.

After the launch of new Honda City on Feb 14 , 2017 the company
wanted to make it clear that it is not competing with Ciaz and that the new Honda City is again a different car marked by the fact that it has a higher price than Ciaz.

Let us find out what actually is different in these cars.

Honda City VS Maruti Ciaz Dimensions Compare – Which one is bigger ?

Looking at the above figures it is a clear indication that Maruti Suzuki Ciaz beats Honda City in terms of Dimensions.

Honda City VS Maruti Ciaz Engine Compare – Which one has a powerful engine?

As far engine power comparison  is concerned Honda City is a winner over Ciaz for both diesel and petrol engine variants.Also in terms of performance Honda City 2017 outperforms Ciaz due to its superior engine.

Honda City VS Maruti Ciaz Mileage Compare – Which one has a better fuel efficiency ?

In terms of better fuel efficiency Maruti Suzuki Ciaz performs way better than Honda City.The mileage (in kilometer per liter) of Ciaz is better than City because it uses smaller engine which consumes lesser fuel.

Honda City VS Maruti Ciaz Price (in lakhs) Compare – Which one is more pocket friendly ?

Going by the above price comparison , while the cheapest Honda City can be bought for Rs 8.5 lakhs while For Ciaz its 7.97 lakhs.The most expensive Ciaz price is 10.76 lakhs while for Honda City it is 12.86 lakhs.