On the safety front, the most important thing is the braking system on any bike. People are often get confused with disc brakes and drum brakes when they come across this jargon at the bike showroom.

Let us help you find out what are the differences, advantages, and drawbacks of disk brake and drum brake. 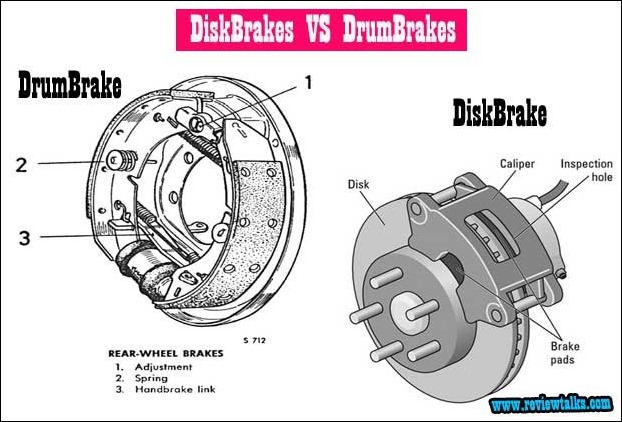 In a general sense, a disk brake in a bike is considered better over its counterpart. However, disc brakes model equipped bikes are expensive as well! Moreover, even disk brake has its own disadvantages.

Did you know? most of the bikes have braking system installed in its front wheel. This is because it has been studied that brake at the front wheel is 70 percent more effective to control the speed, unlike the rear one which is 30 percent.

So what exactly is the difference between disc brakes and drum brakes in bikes and scooters? Basically, it is the action and mechanism of the braking system that makes the difference.

A Disk Brake in Action

The disc brake uses calipers to squeeze pairs of pads against a disc in order to create the friction that retards the rotation of a shaft, such as a vehicle axle, either to reduce its rotational speed or to hold it stationary.

A Drum Brake in Action

A drum brake uses friction created by a set of shoes or pads that press outward against a rotating cylinder-shaped part called a brake drum.

The term drum brake usually means a brake in which shoes press on the inner surface of the drum.

The major difference in disc brakes and drum brakes is seen under heating scenarios when the bike gets hot.

In this case, when the drum brake is applied, brake shoe produces more heat due to friction. As a consequence, braking becomes less effective.

In contrast, a disc brake is not affected in such a situation and wheel stopping power remains powerful.

In the rain, when the wheel of the bike becomes completely wet, at that time when the drum brakes are applied, the correct hold between the brake shoe and the lining will not be able to get the brakes efficiently.

While rain does not have any adverse effect on the disc brakes the bike stops as soon as the break is applied.

Relatively, it is difficult to maintain a drum brake. The dust gets accumulated over the drum brake. Besides, there are several small parts in it that needs to be fixed at timely intervals.

However, it is easy to maintain the disc brake, and the entire brake system is self – adjusting. 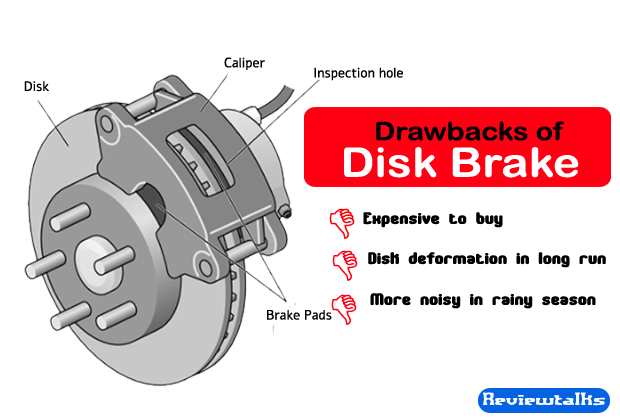 Firstly, disk brakes are expensive than drum brakes. No wonder, drum brake is often used to reduce the vehicle cost. Secondly, the most common disadvantage is that disc brakes are much more prone to noise.

In fact, the design tends to create metallic sound, which can be very annoying. With the passage of time, due to pressing of brake pads on both side of the disk, causes a deformation .