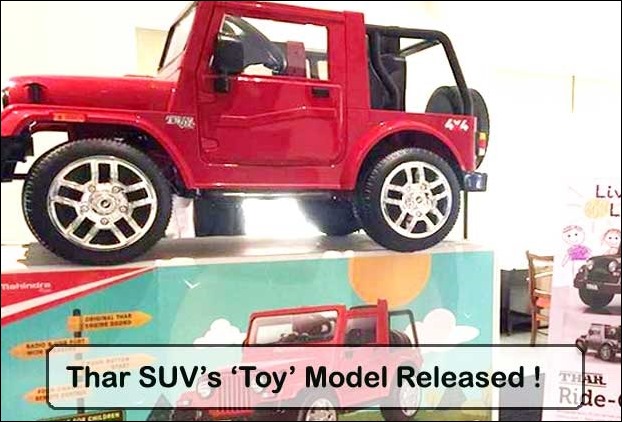 The renowned auto maker of the company Mahindra has launched the toy version of its famous SUV – the Thar for 3 to 7 years old children. It is noteworthy that Mahindra had introduced its first jeep in 1960. The price of this jeep was Rs 12,421. Now, the toy version is more expensive than it. The company’s chairman Anand Mahindra said this through a tweet.

The toy version of SUV Thar, launched by Mahindra has been priced at Rs 17,900. The top speed of this car is 4 kmph. The car takes only 10 to 12 hours for a full charge. This car can run 1 to 1.5 hours with full battery charge.

The toy version looks exactly like the Thar. The car comes equipped with front and back gear, brake, seat belt, accelerator pad and so on. Moreover, there is also a USB radio in it. In terms of safety, a remote control will be provided for children’s parents and with the help of it, the car can be controlled from the outside.

This tiny Mahindra Thar , which can be started with a push button , also includes safety belts to the seats mimicking the original one.The doors can be opened as well.

The replica for children has the original Thar horn and vehicle makes the same engine sound that the regular Thar version makes.To add more delight to the kids (parents !) joy the toy jeep has also received front and rear lights.

The move by Mahindra also seems to create more buzz and anticipations for the upcoming ‘real’ Thar’s modified new design whose launch is round the corner.