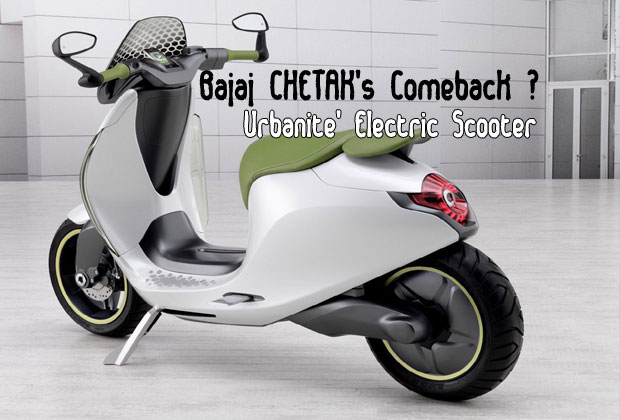 Bajaj Chetak is coming! Although, it would be in its electric avatar model. The comeback of Chetak scooter will be in the form of an electric scooter model named ‘Urbanite’. The two-wheeler manufacturer was recently testing the upcoming electric Chetak model ‘Urbanite’.

Bajaj India’s ‘Urbanite’ will be a new premium brand under which electric scooter will be launched. The new scooter inspires from the retro style and targets young individuals. According to sources, the new scooter model will be introduced by the end of this year or early 2020.

The ‘Chetak inspired’ Urbanite electric scooter model uses classic round shaped headlights similar to the nostalgic scooter of the 80’s era. The Urbanite scooter will use LED day time running lights and disk brake for better stopping power. The company may also launch ‘petrol’ version of this scooter according to reports.

It will have features like a digital instrument cluster, USB charging. Turn by Turn Navigation Assist, Smart Phone Connectivity, Bluetooth connectivity, fast charging system, twin tail lamps, elevated grab rails, alloy wheels, and Integrated braking system.
Bajaj Urbanite is a premium segment electric scooter and so, is expected to deliver 100 KMs ranger after a full charge. Let us remind you, normally you can expect 60-80 Kms range from an electric scooter in India. The scooter is speculated to be introduced with 125 CC engine which can output 9.5 bhp of power.
About Classic Chetak Model
Bajaj Chetak was an immensely popular model which was launched in 1972. The production of this scooter was discontinued in 2006. The ‘middle-class Indian’ scooter used 145 CC two-stroke engine. Its engine generated 7.5 bhp of power and 10.8 Nm torque.